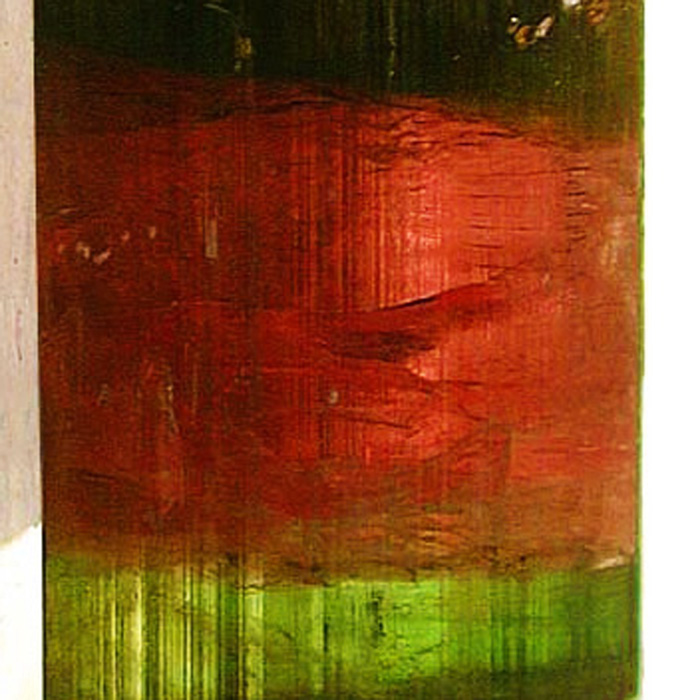 Special Notes: Tourmaline is the perfect colored gemstone. It has good hardness (7 to 7.5 on the Mohs scale) and excellent durability (it has no cleavage). It occurs in an astonishing array of colors, including bi-color and tri-color crystals such as the distinctive watermelon variety. The best tourmaline has excellent clarity and a vitreous luster that makes it the equal of any of the precious stones and nearly every piece of tourmaline is unique. Most importantly, it is a semi-precious stone and much more common (and therefore less pricy) than other colored gemstones. Tiffany has made its reputation as the world leader in colored gemstones in large part by incorporating tourmaline into its designs.

Like garnet, tourmaline gets its range of colors from minute chemical elements that combine with its basic composition: Na(Li1.5Al1.5)Al6(BO3)3[Si6O18](OH)3(OH). The crystals can be black, blue-black, or brown black (iron rich); brown to yellow (magnesium rich); or any color and even multi-color (lithium rich.) Multicolored crystals are common, reflecting variations of fluid chemistry during crystallization. The most recognizable are the “watermelon” tourmalines that have a pink center and a green “rind.”

The pink color of tourmalines from many fields is the result of prolonged natural irradiation. During their growth, these tourmaline crystals receive natural gamma ray exposure from radioactive decay in their granitic environment which deepens the pink to red.

Tourmaline is found in granite and granite pegmatites and in metamorphic rocks such as schist and marble. It is easy to identify as it is the only common mineral to have three sided crystals. The outside faces often have heavy vertical striations that produce a rounded triangular effect to the cross-section.

Tourmaline’s piezoelectric properties make it valuable in industry. It is used in depth-sounding equipment and other equipment that measure and detect variations in pressure. It is also used in optical devices for polarizing light.

Tourmaline is found in many places in the world. But it is one of the few gemstones for which the USA is famous. The first American discoveries were made in 1822 in the state of Maine. California became a large producer of tourmaline in the early 1900’s. The Maine deposits tend to produce crystals in raspberry pink-red as well as minty greens. The California deposits are known for bright pinks, as well as interesting bicolors. During the early 1900’s, Maine and California were the worlds largest producers of gem tourmalines. The Empress Dowager Tz’u Hsi, the last Empress of China, loved pink tourmaline and bought large quantities for gemstones and carvings from the then new Himalaya Mine, located in San Diego County, California. Today most of our tourmaline supply comes Africa, particularly Nigeria and Tanzania.