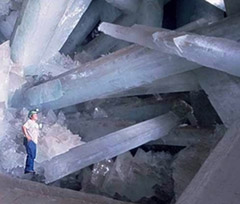 Just in case you were still wondering, size DOES matter. This month we talk about crystal size (what did you think we were talking about?). Big and bold can be fabulous. Crystals can be absolutely humongously amazing, like these gypsum crystals in Mexico.

Teeny can be stunning. Crystals too small to be seen by the naked eye glitter and shine like they own the world.

Let’s explore how crystals grow and what determines how large and well-formed they end up. We will also define that magical term “druzy” that makes jewelers salivate.

Nature likes order. Mineral crystals are formed because the elements that make up that mineral arrange themselves in regular and repeating patterns. For example, quartz is made up of SiO4, or molecules of the element Silicon paired with molecules of Oxygen. The crystals start small, with perhaps just a couple of atoms, and grow as more atoms arrange themselves in that pattern around the starting nucleus or seed. As more molecules attach themselves to the growing crystal, the form or shape of the crystal gets repeated and creates a geometry that we can see – the geometries that we typically think of when we think of crystals.

Freedom to assemble is key. In order for this orderly arrangement or atoms to take place, the atoms must be able to move around. Crystals therefore form in environments where the source solution material is liquid or gaseous. Crystals can form in the depths of the earth where the pressure and heat make the rock magma liquid. Crystals can also form by precipitation in liquid-filled voids or cracks that form as that magma is cooling. Finally, crystals can form as elements solidify out of vapors.

Growth takes time, space and fuel. The main determinants of a crystal’s final size are the speed at which it forms, the space available to it as it grows, and the richness of the source solution that it is coming from. Crystals that form very slowly (in geologic time), deep in the earth, are larger and better-formed than crystals that form quickly near the surface. Crystal size can also be influenced by the contents of the solution from which it precipitates (think rock candy flavors). The ingredients in the magma soup determine the flavor (mineral) of the crystals that form. Finally, the size of the cavity or space will limit the crystal size (think goldfish).

Most mineral crystals grow from molten rock deep within the Earth. As a magma cools, many crystals form simultaneously and crowd into one another, producing irregular shapes. For example, quartz and feldspar crystallize to form speckled granite.

Last but not least. Mineral deposits known as pegmatites are famous for over 300 rare minerals and gemstones. As molten rock cools underground, the water-rich portion crystallizes last. It concentrates rare elements such as boron, beryllium, and lithium that did not fit into earlier-formed minerals. This enriched magma squirts into cracks and cavities in surrounding rock and cools. Most of the stunning crystals you drool over in natural history museums grew in pegmatites.

Small is beautiful. Just like birds, we are attracted to bright, shiny objects. Druzy (or drusy, or druse) specimens of minerals are covered with a thin layer of huge numbers of little, itty-bitty, teeny-weeny baby crystals. This means that thousands of crystal faces, all at regular angles to each other, are in a very small area producing what we commonly call “bling.” These nascent crystals typically formed last, often in a cavity or crack of older rock, where they have the space, materials, and freedom to arrange themselves in perfect forms. They can line the inside of a geode or the surface of an older rock.

Druzy specimens can be of any mineral. The most common druzies are of the most common minerals like quartz (amethyst, citrine, smokey, etc.), but they can be of rare minerals like hemimorphite, or cobalt calcite, or uvarovite. Druzy can be quite delicate compared to typical faceted and cabochon gemstones. The toughness of each drusy piece depends on the nature of the crystals themselves and the matrix in which they are embedded. For example, quartz drusy is relatively durable, while calcite drusy is rather fragile. Any druzy is probably more fragile than a single crystal of the same mineral.