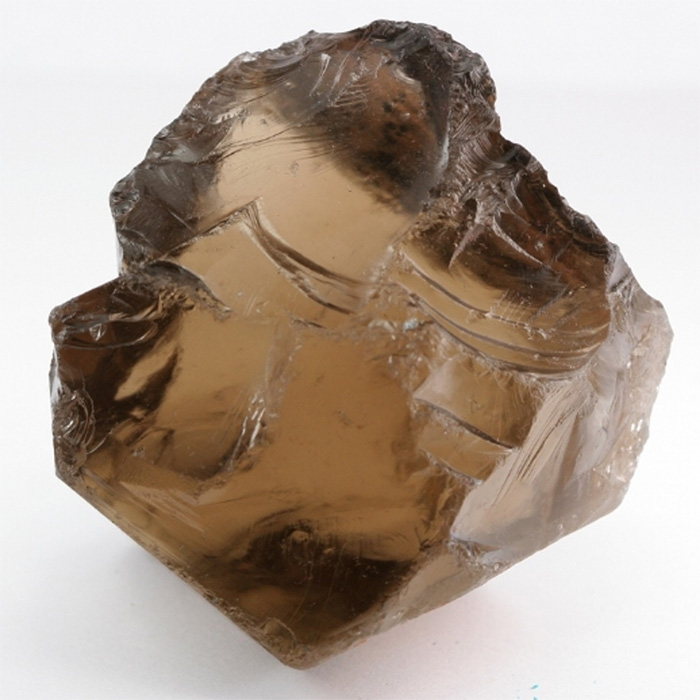 Special Notes: Quartz is the second most abundant mineral in the Earth’s continental crust, after feldspar. It is made up of a continuous framework of SiO4. In nature quartz crystals are often twinned, distorted, or so intergrown with adjacent crystals of quartz or other minerals as to only show part of this shape, or to lack obvious crystal faces altogether and appear massive. Well-formed crystals typically form in a ‘bed’ that has unconstrained growth into a void, but because the crystals must be attached at the other end to a matrix, only one termination pyramid is present. A quartz geode is such a situation where the void is approximately spherical in shape, lined with a bed of crystals pointing inward. The most important distinction between types of quartz is that of macrocrystalline (individual crystals visible to the unaided eye) and the microcrystalline or cryptocrystalline varieties (aggregates of crystals visible only under high magnification). The cryptocrystalline varieties are either translucent or mostly opaque, while the transparent varieties tend to be macrocrystalline. Chalcedony is a cryptocrystalline form of silica consisting of fine intergrowths of both quartz, and its monoclinic polymorph moganite.[8] Other opaque gemstone varieties of quartz, or mixed rocks including quartz, often including contrasting bands or patterns of color, are agate, sard, onyx, carnelian, heliotrope, and jasper.The word “quartz” is derived from the German word “quarz” and its Middle High German ancestor “twarc”, which probably originated in Slavic tvrdý (“hard”), Polish twardy (“hard”). Snow quartz is often crushed and used for ornamental stone and in landscaping. Quartz is also used as an abrasive for sandblasting, grinding glass, and cutting soft stones. Smoky quartz is the color of smoke. Unusually fine specimens come from the Swiss Alps and, in the US, Pike’s Peak, Colorado, and Alexander and Lincoln counties in North Carolina.