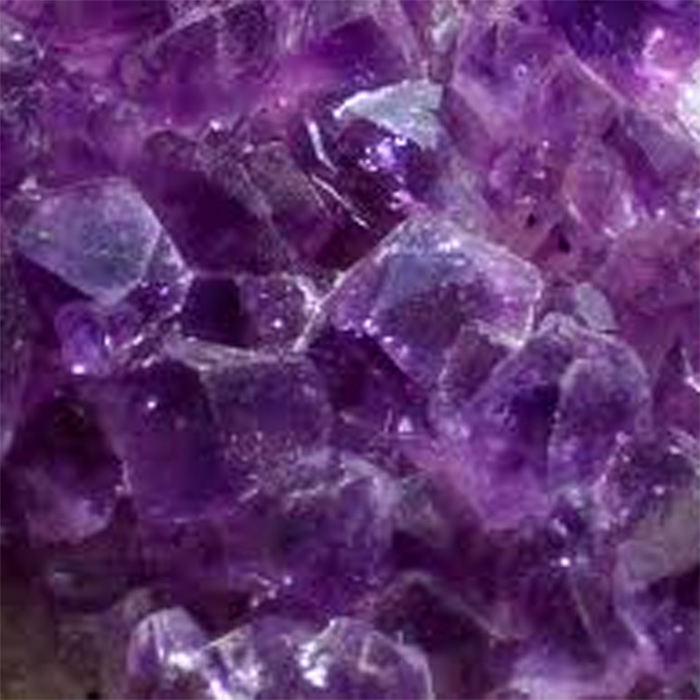 Special Notes: Quartz is the second most abundant mineral in the Earth’s continental crust, after feldspar. It is made up of a continuous framework of SiO4. In nature quartz crystals are often twinned, distorted, or so intergrown with adjacent crystals of quartz or other minerals as to only show part of this shape, or to lack obvious crystal faces altogether and appear massive. Well-formed crystals typically form in a ‘bed’ that has unconstrained growth into a void, but because the crystals must be attached at the other end to a matrix, only one termination pyramid is present. A quartz geode is such a situation where the void is approximately spherical in shape, lined with a bed of crystals pointing inward.

Amethyst is the most well-known and most precious form of quartz. Since purple is considered a royal color, amethyst, the transparent purple quartz, enjoyed an historical importance as an insignia of power. Fine amethysts are featured in the British Crown Jewels and were also a favorite of Catherine the Great and Egyptian royalty. Amethyst was also a favorite stone in the high ranks of the Christian church and was referred to “the stone of bishops”.

The Greek word “amethystos” translates into “not drunken.” Amethyst was considered to be a strong antidote against drunkenness, which is why wine goblets were often carved from it. The gemstone still symbolizes sobriety.

The most important deposits are in Brazil, namely the “Palmeira” amethysts of Rio Grande do Sul and the “Maraba” amethysts of Para. Other deposits are found in Bolivia, Canada, India, Madagascar, Mexico, Myanmar (Burma), Namibia, Russia, Sri Lanka, United States (Arizona), Uruguay and Zambia.