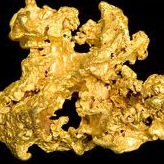 Gold is softer than most people realize with a hardness of only 2.5 on the Moh’s scale (where quartz is a 6 and diamonds are 10), very malleable, and has a relatively low melting point for a metal (just under 2,000 degrees F). This softness is why you rarely find jewelry made of pure (24K) gold – it needs to be alloyed to increase its strength and durability.

Gold is a native element that does not oxidize in air or water, has great resistance to chemical attack, and fabulous electrical conductivity. It is popular with electronics manufacturers in spite of its sky-rocketing cost.

Even more unusual: the gold on Earth is actually from outer space. Our sun is not big enough to create (via heat and pressure fusion reactions in its core) the heavier elements. It took the incredible force of stars collapsing and exploding as supernovas to create the heavy metals like gold, lead and uranium. The explosions spewed these particles throughout the universe where they could be gathered with other gases as the Earth and other planets were forming.

As one of the heavier elements, gold sunk towards the Earth’s core while the lighter elements like oxygen, silica and aluminum (together 83% of the earth’s mass) formed the Earth’s crust. Tectonic activity, volcanic eruptions, and hydrothermal solutions being forced upwards into fissures in the crust all work to bring gold up from the core to the surface where lucky prospectors can find it.

No wonder, therefore that gold has been a treasured material since the beginning of civilization. Golden artifacts have been dated back to the Bronze age over 8,000 years ago. As early as 700 B.C., gold has been used for coins and as a vehicle for monetary exchange. It has historically been the most valued of the precious metals and has many mythological, religious, and cultural meanings throughout recorded history all around the world.

Given all of these amazing properties, it is no wonder that it is currently trading at close to ,600 per troy ounce!

The U.S. purchased Alaska from the Russians in 1867 at 2 cents/acre for .2M (about 20M today). The government wanted to make nice with the Russians who owned it and thought it would make it easier to then buy British Columbia. Gold had first been found in British Columbia in 1861 (and would be discovered in Alaska near Sitka in 1872), but the land purchase was still very controversial at the time.

Less than a hundred miners were working on small gold deposits along the Klondike river through the 1880’s without much fanfare. It wasn’t until the summer of 1896 that the Carmack party found a mother lode in the aptly named Bonanza Creek and everyone nearby rushed to stake a claim adjoining that find. Given the wildness of the terrain, word of the find did not reach the nearest Alaskan settlement until that December.

As soon as the rivers thawed and travel was possible again in the summer of 1987, the first lucky miners reached “civilization” with their treasure troves. One miner arrived in San Francisco with over M in gold (B today) and word of the untold wealth and riches spread like wildfire. The continental U.S. was struggling with a financial recession, bank closures and financial panics (1893 and 1896); so even the brutal travel conditions of travel in Alaska didn’t dissuade over 100,000 optimists from venturing north. Only about 35,000 of these actually managed to reach the remote area of Alaska with the gold and only a fraction of these actually managed to secure a claim, getting there over a year after the rush first started.

In less than two years, a small group of lucky prospectors had claimed all of the attractive land and the only other people making money were the ones supplying these lucky prospectors with food, liquor, lodging and other services. Most of the adventurers headed home by the summer of 1898 and by 1899 the stampede was over. When more gold was found in Canada and Nome, Alaska, there was a minor rush to these sites. By then, however, the Klondike had become a bit of a joke with most Americans – a fool’s lark, an impossible pipe dream.

Best estimates are that 1,250,000 lbs of gold have been extracted from Alaska since 1897. That translates into about 0B in gold, let alone all of the oil, natural gas, fur (bigger than gold for a while), salmon, and other natural resources the U.S. has reaped from Alaska. Rather than being “Seward’s Folly” (after U.S. Secretary of State Henry Seward who drove the purchase), the addition of Alaska to the U.S. has been a fabulous boon!

In spite of its glorious wealth (or perhaps because of it), Alaska did not become a state until 1959. It is the only U.S. state that borders three seas (Arctic, Pacific, and Bearing) and is the Westernmost, Northernmost AND Easternmost state all at the same time (the archipelago crosses the date line and is therefore farther East than the continental East coast.)