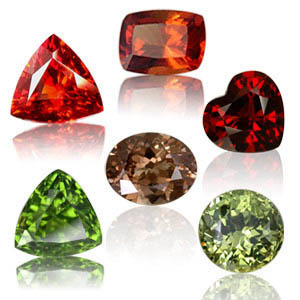 Most folks think “garnets are red, violets are blue …” but garnets actually come in a rainbow of colors including pink, red, orange, yellow, green, blue, brown, purple, black, and clear. They can be highly valued gemstones or cheap industrial abrasives. Garnets are literally and figuratively all over the map.

There are six common species of garnets with different chemical compositions.

Almandine garnets’ deep red transparent stones are often called precious garnet and are the most common of the gem garnets. Almandine often occurs in metamorphic rocks like mica schists. Fe3Al2(SiO4)3

Pyrope garnets’ color varies from deep red to almost black. Transparent pyropes are used as gemstones. Pyrope is an indicator mineral for high-pressure rocks like those formed in the earth’s mantle. Mg3Al2(SiO4)3

Spessartine is orange-yellow from Madagascar and violet-red from Colorado and Maine. Its name is derived from Spessart in Bavaria It occurs most often in granite pegmatite and allied rock types and in certain low grade metamorphic phyllites Mn3Al2(SiO4)3

Grossular can be green (commonly from Siberia), cinnamon brown, red, and yellow. The name grossular is derived from the botanical name for the gooseberry, grossularia, in reference to the green garnet of this composition that is found in Siberia. Grossular garnet with trace amounts of vanadium or chromium from Kenya and Tanzania has been called tsavorite. Ca3Al2(SiO4)3

Andradite may be red, yellow, brown, green or black. The recognized varieties are topazolite (yellow or green), demantoid (green) and melanite (black). Demantoid has been called the “emerald of the Urals” from its occurrence there, and is one of the most prized of garnet varieties. Ca3Fe2(SiO4)3

Uvarovite is a rather rare garnet, bright green in color, usually found as small crystals in the Ural mountains of Russia and Outokumpu, Finland. Ca3Cr2(SiO4)3

Most garnets actually fall somewhere in between these chemical formulas (solid solution series), with varying amounts of the defining minerals. They also sometimes have trace amounts of other elements that dominate their color. For example, a pyrope-spessartine mix with 1% vanadium turns garnets blue-green in daylight and purple in incandescent light. A variety of garnet somewhere between pyrope and almandine from Macon County, North Carolina is a vivid violet-red shade and has been called rhodolite, from the Greek meaning “a rose.”

The Garnet group is a key mineral in interpreting the genesis of many igneous and metamorphic rocks. Garnets, in their different forms can tell geologists a great deal about the temperature, pressure, and time frame of the formation of their surrounding matrix rock.

Red garnets were the most commonly used gemstones in the Late Antique Roman world, and then the Western Empire. They were especially used inlaid in gold cells in the cloisonné technique, a style often just called garnet cloisonné, found from Anglo-Saxon England to the Black Sea.

Pure crystals of garnet are still used as gemstones – most commonly the vivid shades of green, red and orange. In the USA it is known as the birthstone for January, is the state mineral of Connecticut, is the New York gemstone, and is the Idaho gemstone (the star garnet with rutile asterisms.

Garnet sand is a good abrasive, and a common replacement for silica sand in sand blasting. Alluvial garnet grains which are rounder are more suitable for such blasting treatments. Mixed with very high pressure water, garnet is used to cut steel and other materials in water jets. For water jet cutting, garnet extracted from hard rock is suitable since it is more angular in form, therefore more efficient in cutting. Garnet paper is favored by cabinetmakers for finishing bare wood. Garnet sand is also used for water filtration media.