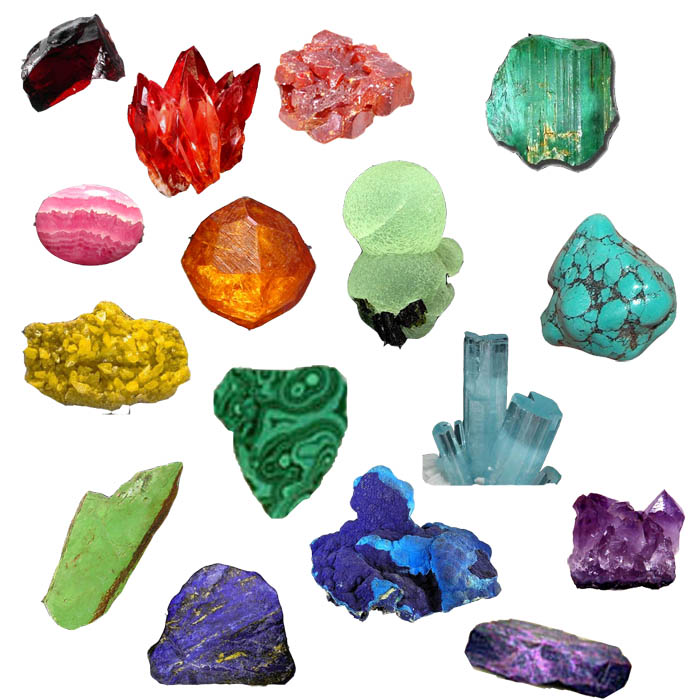 Color is the first thing most people notice about minerals and the reason that they make great jewelry. Minerals appear naturally in an infinite rainbow of color hues. Some minerals are always the same color,

others can be many different colors,

and some like opals and labradorite change color in different lights.

Minerals have been the source for color pigments in paleo-lithic cave paintings and modern cosmetics. Some minerals have even named their colors – think azure(ite) blue.

What gives minerals their fantastical colors? It all boils down to four reasons:

1) Chemical composition: Certain elements (particularly heavy metals) strongly absorb portions of the light spectrum and therefore appear to have certain colors. Minerals that are based on these elements will be consistently “self-colored” or idiochromatic. Although still subject to the effects of trace elements, the mineral’s color is constant and predictable.

Copper (Cu) in different oxides and in different crystal forms produces the teal blue in turquoise CuAl6(PO4)4(OH)8•4H2O, the azure blue color of azurite Cu3(CO3)2(OH)2, and the vivid green in malachite Cu2CO3(OH)2

Manganese (Mn) produces the pink color of rhodochrosite MnCO3 and mercury (Hg) makes cinnabar HgS red (and toxic!). The violet red of erythrite Co3(AsO4)2•8H2O is from its cobalt (Co)

Chromium (Cr) produces the color orange-red color of crocoite PbCrO4 , but the red-orange color of vanadinite Pb5(VO4)3Cl is caused by its Vanadium (V)

2. Chemical Impurities: All natural minerals contain minute impurities. This means that in addition to their chemical composition, they have trace quantities of other elements (often less than 1% of their mass) that have been incorporated into the mineral as it formed. Many minerals get their color from these impurities and are called “other colored” or allochromatic. Common coloring elements are titanium (Ti), vanadium (V), chromium (Cr), manganese (Mn), iron (Fe), cobalt (Co), nickel (Ni), and copper (Cu).

As the amount and type of impurities varies, so do the colors seen in that mineral. For example, pure quartz SiO2, is colorless, but add some iron (Fe) impurities and it turns into purple amethyst. Add instead Fe3+ and you get yellow citrine. Mix some trace amounts of titanium or manganese to pure quartz and you have pink rose quartz.

If we take one (relatively boring) mineral beryl Be3Al2(SiO3)6 and add different impurities in different oxidation states, we get some fabulous gems in different colors:

3) Inclusions of other minerals or elements: Inclusions of one mineral within a host mineral can also cause a color difference. Quartz has many examples of color changes due to inclusions. Chlorite inclusions in quartz cause it to turn green. Rutile inclusions give it a golden hue. Milky quartz is the most common form of quartz and gets its color because of minute fluid inclusions of gas and/or liquid trapped during the crystal formation.

Some minerals change color when heated (a common technique to artificially enhance the color of many gemstones.) Naturally occurring or artificially applied radiation can also have an effect – smoky quartz being the most common example.

Finally, some minerals change color when they tarnish or oxidize: silver tarnishes black, yellow, or brown; copper oxidizes green; and chalcopyrite oxidizes to an iridescent array of colors.