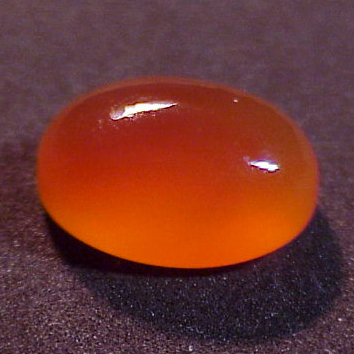 Scientific Name: Variety of Chalcedony (itself a microcrystalline variety of quartz) with iron oxides

Colors: Blood-red to reddish orange due to iron oxide.

Special Notes: Carnelian has been used in jewelry and adornments since the 5th century BC. It was the Roman’s favorite gem for carving and creating signet rings to seal correspondence with wax. It has been used by kings and high priests in almost all cultures and geographies and has become one of the more popular gemstones of all time.

As you probably could guess from my “It’s All Quartz to Me” newsletter a couple of months ago, carnelian is a variety of the silica mineral chalcedony. It is orange because of the hematite (iron oxide) included in the structure, but ranges in hue from pale peach to deep chocolate. Unfortunately, many have found it easy to dye chalcedony by baking it with iron salts or just heating it and much of the carnelian you now find for sale is treated. Natural carnelian shows a cloudy distribution of color – unlike died agates that show stripping of color hues.

Mineralogically, it behaves like quartz. It has a hardness of 7 on the Moh’s scale, a chemical composition of SiO2, and a waxy luster. The finest, most vivid orange specimens are from India. However, other large sources are Brazil, Australia, Scotland, Egypt, Germany, China and the U.S.

Carnelian (also sometimes known as cornelian) is probably named after the Kornel cherry because of its color. The latin carneus also refers to the color. It was once thought to still the blood and calm the temper, give courage, and improve eloquence. All I really know is that it is a stunning shade of orange matched only by the local California poppies.