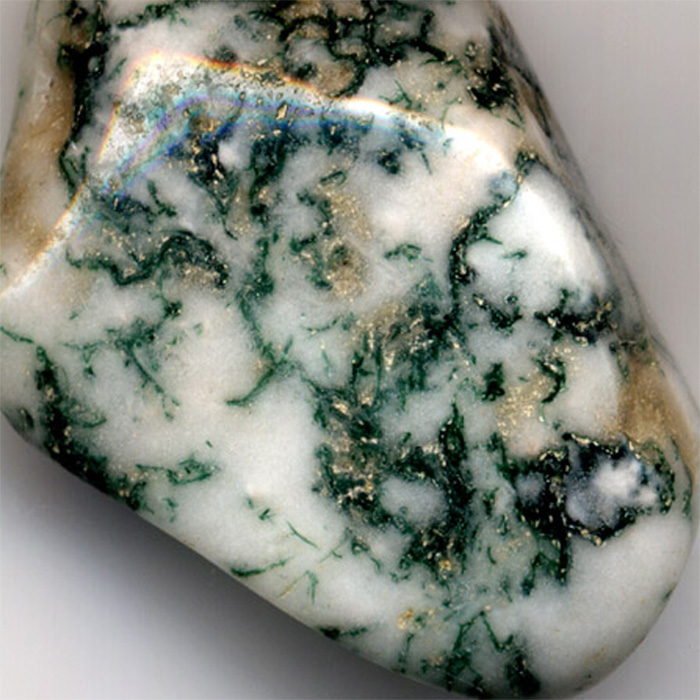 Colors: Moss-like inclusions of iron or manganese oxides or chlorite.

Special Notes: Most agates start as nodules formed in volcanic rocks or lavas when the molten mass and vapors separate to form bubbles or voids. As the stones cool, the voids are filled with siliceous matter deposited in regular layers upon the walls. When you cut an agate that formed like this, you see banded lines or layers noting the different compositions of the materials deposited over time. Variations in the character of the solution or in the conditions of deposition may cause a corresponding variation in the successive layers, so that bands of chalcedony often alternate with layers of crystalline quartz. The first deposit on the wall of a cavity, forming the “skin” of the agate, is generally a dark greenish mineral substance, like celadonite, delessite or “green earth”, which are rich in iron probably derived from the decomposition of the augite in the enclosing volcanic rock. This green silicate may give rise by alteration to a brown iron oxide (limonite), producing a rusty appearance on the outside of the agate-nodule. The outer surface of an agate, freed from its matrix, is often pitted and rough, apparently in consequence of the removal of the original coating. The first layer spread over the wall of the cavity has been called the “priming”, and upon this base zeolitic minerals may be deposited. Many agates are hollow, since deposition has not proceeded far enough to fill the cavity, and in such cases the last deposit commonly consists of quartz, often amethyst, having the apices of the crystals directed towards the free space so as to form a crystal-lined cavity, or geode. On the disintegration of the matrix in which the agates are embedded, they are set free. The agates are extremely resistant to weathering and remain as nodules in the soil or are deposited as gravel in streams and shorelines. Moss agate is so named because of its green dendritic inclusions that resemble moss growth patterns.